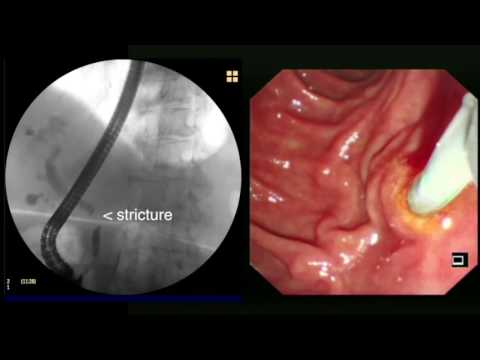 An 80 year old lady with a past history of breast cancer presented with painless jaundice (Bilirubin 320 umol/L). The CT scan showed a 3cm mass in the head of the pancreas with vascular involvement and a distended gallbladder. She was referred for an ERCP. After reviewing the CT scan, my trainee reminded me of Courvoisier’s Law and we examined the patient’s abdomen before starting the ERCP. The gallbladder was easily palpable. The ERCP showed a bile duct stricture which was stented (see video).

Courvoisier’s “law” states, “in the jaundiced patient, if the gallbladder is palpable, the jaundice is unlikely to be due to stones, and therefore, by elimination, is due to a carcinoma at or around the head of the pancreas.” The usual reasoning is that stones would have given rise to chronic inflammation and subsequently fibrosis of gallbladder therefore, rendering it incapable of dilatation. Conversely, the causes other than stone (principally tumours), would result in the distension of gallbladder, felt on abdominal palpation.

Variously described as Courvoisier’s law, sign, or even gallbladder, this eponymous “law” has been taught to medical students since the publication of Courvoisier’s treatise in 1890. But is it really a law? Courvoisier himself did not construct this law /sign. He described 187 cases of common bile ducts obstruction and made the observation of a rare dilatation of the gall bladder, with stone obstruction of the bile duct. The Swiss surgeon himself never stated in his original publication the association with malignancy as he wrote “in my surgical patients I found 35 cases with obstruction to the choledochus; 17 had stones, 18 had strictures or compression by tumors. Of the 17 with stones, only 4 had ectasia of the gall bladder, compared with 16 of the 18 with other causes. Of the 20 ectasias only 4 had stone obstruction; 16 were due to other causes”. [Courvoisier 1890]. Somehow, this observation mutated into THE LAW that is taught to all unsuspecting medical students and surgical trainees!