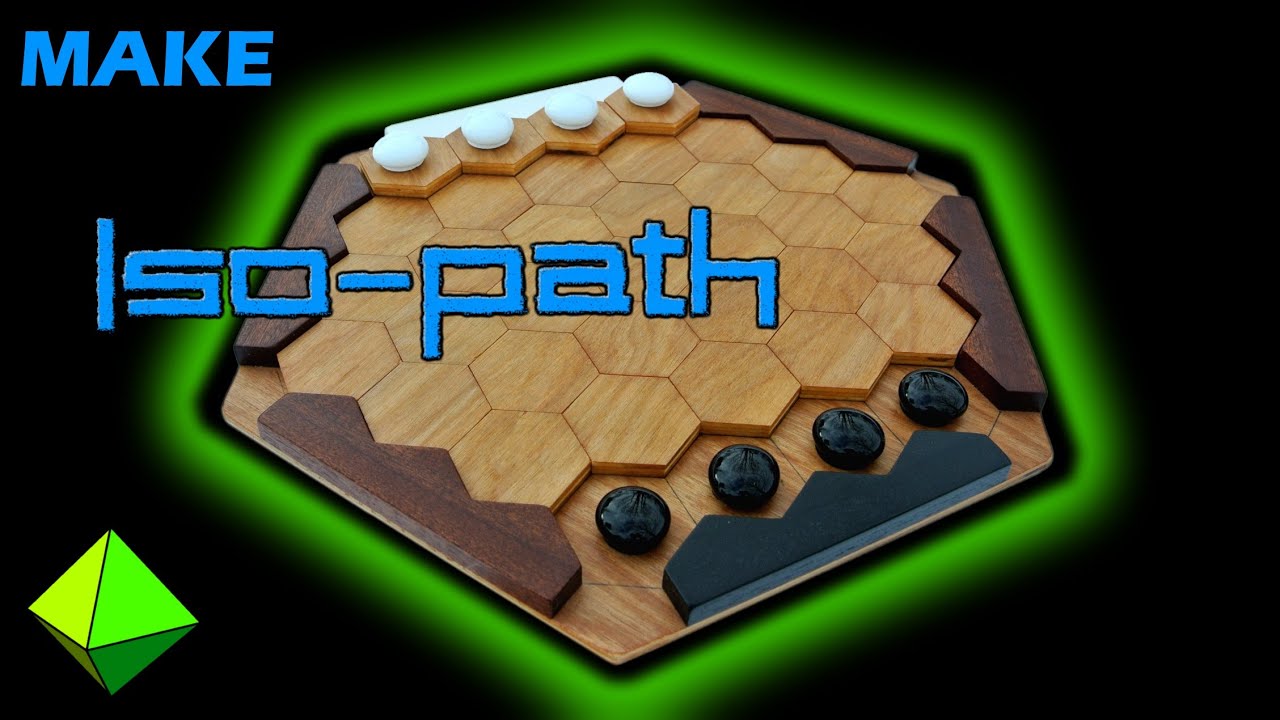 Most of this video is about how to construct a game-board for playing Hexagonal Iso-Path. The final five minutes explain how to play.

Alternatives and similarities-
The first rule-set for this game was created by pocket83 in March, 2017. Those rules apply specifically to a 37-space hexagonal game board which uses eight game pieces (and two players). They are subject to revision and addition. As such cases arise, this description (and the associated links to the rule sheets) will be amended to accommodate them.

This game could also be played on an h5 (61-space) board, or it could be played with additional pieces. I shouldn’t have to tell you that such changes add vastly to the complexity of the game, and as such, the version presented here was best suited for an introduction to game-play. This standard version of the game has 22% of the board covered by pieces, which is a comfortable balance between player freedom and large-space tedium. Additional pieces may give variety for experienced players, but we’ve found that eight pieces per player feels extremely limiting, so no more than six pieces is recommended for an h4 board. There is also a three-player aspect to this game, but it’s complicated, so read more about it in the rule-sheet links.

Mrs. pocket would like to add that a set of marble hexagon tiles would be ideal. That might sound extravagant, but hexagon-tile mosaics are available online and at most home centers in travertine, granite, glass, marble, and more. Since the game only requires 37 tiles to play, that amount can usually be found within a single, one square-foot tile mesh. That translates to only around 10 or 15$. I would have liked to mention that in the video, but it was getting too long, and I don’t really need another game board!

There are, of course, many hexagonal board games to be found throughout history, but Hexagonal Iso-Path is being presented to you in this form as a standardized, original creation for the exclusive purpose of having a fun and simple strategic capture game. No promises, but I’ve personally designed this game to be what I want to play in a zero-sum board game. However, any similarities to anything that may already exist is purely coincidental. If (and as) other related games reveal themselves to me, I will post mentions of them here to give credit where it is due. At present, I have no knowledge of the existence of the game design presented here. That said, I like to imagine that some distant years ago, maybe in some quiet and isolated grass-roofed village, there were perhaps already experienced players of this simple-yet-intriguing game. They could have fashioned ornate pieces from light-colored stone. They played in the warm, sun dried dirt of the era that was without time’s pressuring imposition; that place before the complexity brought on by our modern fixation with the abstract. To them, I pay homage by admitting that idea ownership is a fool’s personal overstatement. Property, intellectual or otherwise, is transient and insubstantial. Either case, mine or theirs, I truly love this game, and I hope that you will too. Please enjoy.

Now imagine a day on which the birds are disconcerned with your presence, because their own affairs are seemingly of greater import. You could here recognize your place as a visitor; you are only acted upon in this world, and you do not cause any of this. Why not? Because there is no you. You are only the infinitely small point to which all physical phenomena seem to point, but when we look closely at that spot, there’s nothing there. Self implies separation, and both are impossibilities.